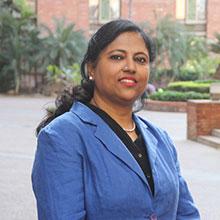 Dr Piyali Das is a Senior Fellow and Area Convenor of Pyrolytic Biofuels, Biochar and Green Chemicals, in the Advanced Biofuel Division (ADB) at TERI. She is also a secondary member of Renewable Energy Technologies (RET) Division and an adjunct faculty in the Department of Energy and Environment, TERI School of Advanced Studies (TERI SAS).

She completed her Masters in Chemistry (Spl. Physical) in 1995 and M. Tech. in Energy Science and Technology in 1998 from Jadavpur University, Calcutta. She obtained her doctorate in Energy Systems Engineering from IIT Bombay in 2004. Her research was on the studies on vacuum pyrolysis of biomass for liquid fuels.

In TERI, she has been leading research activities in liquid biofuel, bio carbon, and alternate transport fuel from biomass, algae and waste sources (tyre, plastic & industrial) through thermochemical route. She has developed the PLC based gas-fired Pilot Pyrolysis Test Unit for bio oil and bio char and is presently working on catalytic upgrading of bio oil and upscaling aspects of the pyrolysis technology. Her research areas include pyrolysis technology development, alternate transport fuel from bio oil through catalytic upgradation, bio oil for heat and bio-refinery applications, biodiesel, biochar, activated carbon and green chemicals.

Dr Das has 12 scientific publications in international journals and seven patents granted, with one published on pyrolysis & nanotechnology based technologies to her credit as lead inventor. She has presented eight papers as invited speaker in international conferences and written five book chapters. She has mentored seven post graduate students and has guided PhD students in the field of bioenergy, biofuels and biomass-based carbon. She also led the first International Conference on Sustainable Fuels as Technical and Project Head and led 10 projects as principal and co-principal investigator. She is also working on industry-funded projects for conversion of industrial wastes to industrial grade value added chemicals.

She has been awarded Bioenergy-Awards for Cutting Edge Research (B-ACER) Fellowship (2016-2017) by the Department of Biotechnology, Govt. of India, and the Indo-US Science and Technology Forum (IUSSTF), TERI's Role of Honour in 2015, IRCC Research Award (IIT Bombay Best Research Paper Award 2013) based on highest ranking and best citation on Scopus database, ICS-UNIDO fellowship for post-doctoral research in Biofuels and Chemicals from Bioresources in Trieste, Italy (2008), Best Paper in the National Renewable Energy Conference 2000 and is a recipient of the National Merit Scholarship.