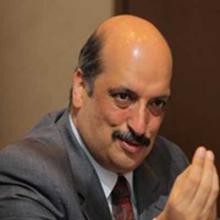 Ambassador Ajai Malhotra holds an M.A. in Economics from Delhi School of Economics. He was a member of the Indian Foreign Service from 1977 till retiring as Ambassador of India to the Russian Federation on November 30, 2013.

From 1989-1993, he worked at the Ministry of External Affairs, New Delhi, initially as Deputy Secretary looking after Human Rights and International Environmental Issues and then as Director of the UN Division, handling all multilateral work except disarmament. He was Counsellor at the Embassy of India, Moscow, from 1993-1996, returning to the Ministry of External Affairs as Director in 1996. As Joint Secretary in that Ministry from 1997-1999, he guided India's relations with all Central/East European countries, including the Russian Federation. From 1999-2003, he was Minister (Commerce) at the Embassy of India, Washington DC, additionally serving from 2002-2003 as Chairman, International Cotton Advisory Committee, Washington DC.

His association with environmental issues has included participation in the UNEP Session of a Special Character: Ten Years after Stockholm (Nairobi; 1982); contribution to the 1990 London Amendments to the Montreal Protocol on Substances that Deplete the Ozone Layer, Convention on Biological Diversity, UN Framework Convention on Climate Change, Rio Declaration on Environment and Development, Statement of Principles on Forests, and Agenda 21; participation in the UN Conference on Environment and Development (Rio de Janeiro; 1992). He has also written on issues such as the rights of future generations. In 2004, Ambassador Malhotra was awarded an Honorary Doctorate by Vasile Goldis Western University of Arad, Romania, in recognition of his work in support of environmental causes and development.

Ambassador Malhotra is a Distinguished Fellow with TERI since April 2014. He is also presently an Independent Director of the Oil and Natural Gas Corporation, as well as Chairman and Managing Trustee of CHIKITSA and SHIKSHA (which provide free primary health care, education and vocational training to the underprivileged), Chairman of the Nehru Trust for the Indian Collections at the Victoria & Albert Museum, Chairman of the NAB Centre for Blind Women and Disability Studies, and Member of the Editorial Board of "World Economy and International Relations" ("MEMO Journal") brought out by the Institute of World Economy and International Relations, Moscow.