WSDS 2021 closes with a promise to achieve a common goal of green growth, and net-zero by 2050 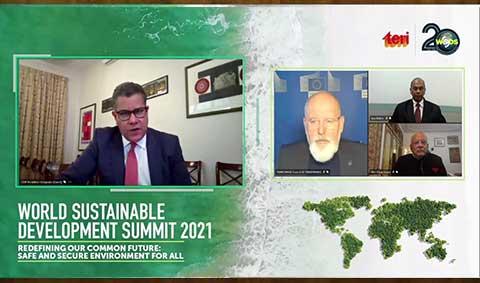 - India will be vital for the success of COP26, UK is committed to work with countries that are vulnerable to climate change: Rt Hon. Alok Sharma MP, COP26 President-Designate

- We stand at a pivotal moment in the fight for the climate crisis and the biodiversity crisis. Hope we can increase the sense of urgency as far as biodiversity is concerned: Frans Timmermans, Executive VP of European Commission responsible for European Green Deal

New Delhi, February 12, 2021: "We all share one precious life giving, but fragile, planet and each of us has a stake in its future. Only through ambitious net zero commitments and strong international collaboration can we bring the benefits of clean growth and resilient economies to everyone around the world", said The Rt Hon. Alok Sharma MP, COP26 President-Designate, while speaking at the valedictory session of the World Sustainable Development Summit (WSDS) 2021.

"I welcome the important discussions that TERI have convened this week, which reflect the spirit of inclusivity the UK COP Presidency has at its heart. This is vital to creating a cleaner, brighter future for us all", the COP26 President-Designate added further.

In his address, Mr Frans Timmermans, Executive Vice-President of the European Commission responsible for the European Green Deal, said, "We stand at the pivotal moment in the fight against climate crisis and the biodiversity crisis. Tipping points are getting closer. We have only a couple of years left to make the necessary changes in our policies if we really want to avoid those tipping points. How we shape our recovery from the pandemic will determine whether we can succeed in our fight against the climate crisis. We need to use this time to really innovate our economies at world scale. We have to open the gates to green growth and a healthy future for all so that we can tell our future generations that we took the first steps that led us to the road of real and sustainable recovery."

Delivering his address, Shri Nitin Desai, Chairman, TERI, said, "There is a much broader sense of sentiment among the corporates, individuals and youngsters on climate action. There is a universal agreement of scientists, civil societies, and corporations on what can be done to combat climate change. The challenge now is before the governments to provide policies that support positive sentiments towards climate change and broader issues on sustainable development."

Speaking about COP26, Dr John Murton, UK's COP26 Envoy and responsible for coordinating UK diplomacy in relation to COP26, said, "The focus of COP26 must be on three things: 1) Improving the quality of public finance; 2) Mobilisation of private finance; and 3) Enabling this transition to happen faster so that every financial institution takes climate finance into account in their allocations."

Ms Patricia Espinosa, Executive Secretary, United Nations Framework Convention on Climate Change, said, "2021 is the most critical year for climate action. This year will culminate at COP26, and it must be a success. We cannot achieve success at COP26 and our climate action efforts without proper financing mechanisms. Multilateralism is the only way forward and the Paris Agreement remains the blueprint for success. Nations have an obligation to do better and they must mobilize funds and do it before COP26. "

Ms Rachel Kyte, Dean, The Fletcher School, said, "The issue of mobilising climate funds is formed of three concentric circles. First is the 100 billion USD promise that must be realised now. Second is the need for climate financing and how to stimulate it and the third should be the system change which is imminent. Renewable energy, storage, infrastructure for e-mobility will require significant investments. Resilience and adaptation is the need of the hour."

Dr Ajay Mathur, Director General, TERI, while delivering the vote of thanks at the valedictory session, said, "As the twentieth edition of the World Sustainable Development Summit 2021 comes to an end, we take with us, the ideas and the challenges that we must keep in mind to combat climate change. We are delighted to announce that we had over 30 set of sessions with 265 speakers and 21 partners. A range of issues were discussed such as energy transition and climate, adaptation and resilience, clean oceans, women and youth and the kind of ideas that we received this year were much more measurable which is a clear change that how people are talking more about environmental and climate issues."

The three-day event addressed the theme, 'Redefining Our Common Future: Safe and Secure Environment for All’. As the country partner of the WSDS 2021, the UK government was closely involved in various sessions of the summit, in the run-up to the COP 26, which it is preparing to host in Glasgow in November this year. Bloomberg Philanthropies, Shakti Sustainable Foundation, Tata Cleantech Capital, European Union, USAID, World Bank, were some of the key institutions that partnered with the summit to rally around the themes of clean air, renewable energy, environment, clean oceans, energy transition, resource efficiency and circular economy, among several others.

Since its inception in 2001, WSDS has been a significant platform for showcasing India’s plans, policies, priorities, and actions by identifying the most topical issues, of environment and sustainability. Over the years, many collaborations and partnerships that have been fostered and going forward, new ones will be launched and conceived.