"We have to come to Glasgow with no excuses; it's the last best chance to get to net zero", President Biden's Envoy, John Kerry says 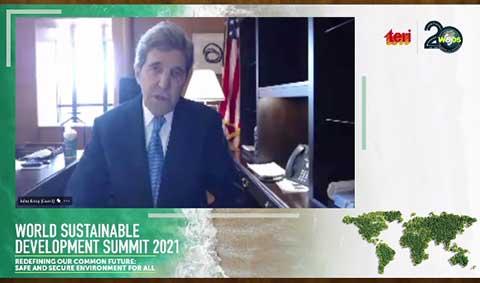 - India is on the path of growth, and this growth needs to be as green as possible

The roundtable aimed to steer discussions towards strengthening commitment to maximizing renewable energy, enhancing capacity to deal with the changing climate, and creating financial flows to help enable these actions.

Dr S Jaishankar, Hon'ble Minister of External Affairs, Government of India said, "Climate change is a great challenge and India has managed through it quite efficiently. India understands the need for global awareness for behavioural change, including judicious use of resources. Among G20 nations, India has managed the fastest growing energy expansion in the world. It stands committed to meeting both the developmental requirements of its citizens and ensuring to meet the stated commitments to climate action, it is upon the upcoming generations to lead the way in this aspect."

Speaking about the upcoming COP26 in Glasgow, Mr Kerry said, "We have to come to Glasgow with no excuses. We don't have time to point fingers. We have to break barriers between us. This is our last best chance to get to net zero."

"India today is the third largest emitter in the world behind the United States and China. However, India's down-payment on the Clean Energy transmission has made the country the global market leader in the sector, thanks to which building solar energy in India is cheaper than anywhere else in the world. We must understand that the whole world is in this together and that domestic action of any one country is not enough – We must always consider pushing for climate change together. India has committed to a new Hydrogen mission which makes it one of the incumbent leaders to lead a Hydrogen based economy. Net-zero emission commitment from several countries is a critical move giving us an opportunity to stimulate economic as well as environmental goals. Failure is not an option.", Mr Kerry added.

Emphasising on the need to take the right decisions to repair the damage from the past in the long run, The Rt Hon Lord Zac Goldsmith, Minister for Pacific and the Environment at the FCDO, UK, said, "There is a need to break the link between economic growth and environmental devastation. We know the right thing to be done will create not only a sustainable environment but also create job opportunities aligning recovery packages with the Paris agreement and the Sustainable Development Goals. Green recovery can help create more jobs, short term returns and reduce costs. Solar and Wind are already cheaper than coal – which is one of the most unanticipated changes from the past."

Mr Mohammed Nasheed, Speaker of the People's Majlis, Republic of Maldives, said, "We are developing prosperity plan in the climate vulnerable forum countries to ensure that the by-product of development is zero carbon. The idea is to bring economists to formulate a development strategy to bring the same economic outcomes – Low Carbon, Less Extraction and More Recycle – These would invoke infrastructure building for adaptation."

Ms Amina Mohammad, Deputy Secretary General, United Nations, said, "2020 was a significant year for climate action. As we commit to zero emission goals until mid-century, we look forward to a lot more positive change in the months and years to come environmentally. In the last eight years, India has seen a fivefold increase in the renewable energy sector. The ISA, in India remarkably continues to deliver on its One Sun One World One Grid commitment efficiently, thereby safeguarding biodiversity and pioneering resilience in the infrastructure sector. India has through its efforts created a major economic opportunity for a resilient nation."

Organized annually since 2001, the WSDS platform has facilitated the exchange of knowledge on all aspects of sustainable development. Over the past twenty years, it has emerged as one of the foremost fora on issues of global sustainability. This flagship event brings together regional and international thought leaders including various heads of state and government, policymakers, and leaders from several industries and academia to deliberate on myriad issues of topical environmental importance.

The detailed agenda of the programme can be accessed here.