Shifting to cycling can result in an annual savings of up to 1.6% of India's GDP: TERI study 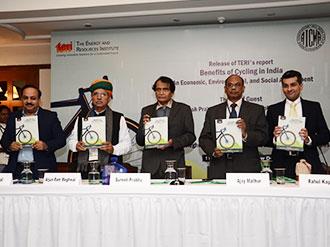 Cycling for short distances can result in an annual benefit of INR 1.8 trillion to the Indian economy, which is equivalent to 1.6% of India's annual GDP

- Shifting only half of all the short-distance work trips, which typically take place through cars and two-wheelers, to cycling can result in massive savings in the fuel expenditure. This analysis undertaken for 2015-16 revealed that India could save INR 27 billion from personal fuel savings (refer Figure 7a in the report), 0.35 MTOE annually and reduce CO2 emissions.

- Unskilled marginal workers who walk to work for more than 3.5 km can save up to 23 million labour hours which are equivalent to travel time savings of 112 billion rupees

- Cycling regularly for an average distance of approx. 3.5 km in 120 days can help avoid 4,756 premature deaths

New Delhi, 11 January 2019: The Energy and Resource Institute (TERI), a leading think tank dedicated to conducting research for sustainable development in India and the Global South, launched a report titled, 'Benefits of Cycling in India: An Economic, Environmental, and Social Assessment' in association with the 'All India Cycle Manufacturers' Association' in New Delhi.

Shri Suresh Prabhu, Hon'ble Union Minister for Commerce & Industry, in his inaugural address stated that cycling should become a dominant form of intra city transport. He also announced the creation of a council which will promote the manufacturing of cycles and work towards its uptake by masses.

Through several inspiring anecdotes and giving example of his good health due to extensive cycling, Shri Arjun Ram Meghwal, Hon'ble Minister of State for Water Resources emphasized the need for inter-generational sustainability. He spoke about the need for this generation to be mindful of what legacy they shall be passing down to the next generation. He reiterated that cycling could play an instrumental role in addressing environmental and health related issues. He also mentioned about the need for developing infrastructure which could enable a culture of cycling in the country.

Commenting on the findings of the report, Dr. Ajay Mathur, DG, TERI highlighted that safety remains a key concern restricting the use of cycles as a mode of transport. Cycles are also looked down upon and considered a 'poor man's mode', discouraging uptake from a larger section of society. Dr Mathur emphasized the need to make cycling 'suvidhajanak' to enable wider adoption by people.

As per the report findings, cycling for short distance trips can yield an annual benefit of 1.8 trillion rupees to the economy which is equivalent to 1.6% of India's annual GDP. Based on analysis of Census data, TERI's report observed that 50% of the people in India use non-motorized forms of transport, such as walking and cycling to travel to work. In rural areas, cycle is the most used mode of transport after walking while in urban areas, two-wheelers is the most widely used mode of transport after walking.

The analysis in the report reveals that substitution of just half the short distance work trips, which are typically undertaken by two-wheelers and cars, by cycles, could result in massive savings; savings to the tune of INR 27 billion from fuel expenditure and 0.35 Million Tonnes of Oil Equivalent (MTOE) in terms of energy. The study also brings out that cycling regularly for an average distance of 3.5 km for just 120 days can help avoid 4,756 premature deaths. Cycling can also help in reducing air pollution related mortalities, resulting in savings of INR 241 billion.

Lack of mobility options exacerbates the incidence of poverty by restricting access to opportunities of livelihood, education and health services. The study estimates that access to cycles can help unskilled marginal workers, save up to 23 million labour hours which is equivalent to INR 112 billion in terms of travel time savings.

The report highlights the need for making cycles affordable and recommends that the government should reduce GST on cycles with cost less than INR 5000. The report also recommends that cycles should be brought under the priority-lending guidelines of the RBI. The study also suggests that Government should develop a platform to support cycling industry by promoting development of technology for indigenous production of advanced raw materials. In order to enable development of safe cycling conditions in Indian cities, the report emphasized the need for cities to invest on cycling infrastructure. Report recommends that policy instrument need to be created which can couple mandatory investment on NMT infrastructure whenever cities invest in motorized and public transport infrastructure. The report also suggests the need for city to plan cycle sharing schemes and awareness campaigns to promote cycling in the cities. The report further highlighted that cities, should at the same time also discourage the use of personal motorized vehicles through restraint measures like congestion and parking pricing, pollution tax etc.

The Energy and Resources Institute (TERI) is a leading think tank dedicated to conducting research for sustainable development of India and the Global South. Established in 1974, TERI has become the pre-eminent institution for research, discussion and thought leadership on environmental governance and sustainable development. TERI is ranked globally as one of the five most impactful think tanks by the International Center for Climate Governance. The Institute is committed to the application of thought that drives action in the direction of tackling climate change.

Press Release
Presentation - Benefits of Cycling.pdf1.14 MB
Tags
Carbon footprint
Public Health
Road transport
Transport
Themes
Transport
This block is broken or missing. You may be missing content or you might need to enable the original module.