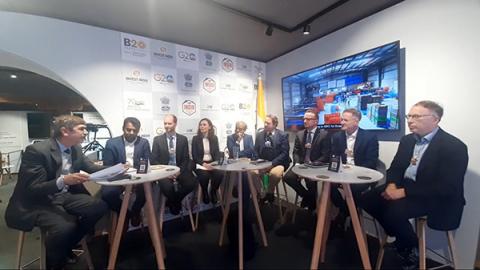 Davos, January 17, 2023: Industry leaders asserted the immense potential of India’s transitioning energy systems and emphasized the need to forge partnerships across private, public and philanthropic entities to aid the country in attaining its net-zero targets at a fireside chat organised by the Ministry of Commerce and Industry, and Invest India in association with The Energy and Resources Institute (TERI) at the annual meeting of the World Economic Forum (WEF) in Davos on Tuesday.

Moderating a panel discussion on ‘The Path to Net Zero for India: The role of Public-Private Partnerships’, with industry leaders and other stakeholders, Mr Girish Sethi, Senior Director, TERI, drew attention to the commitments made by India towards its net-zero targets at COP26 in Glasgow, and underscored the array of initiatives undertaken since at the government level, with the National Green Hydrogen Mission being the latest, to make the targets attainable.

Taking part in the fireside chat, Mr Jeremy Oppenheim, Senior Partner, SYSTEMIQ and Member of Board of Directors, Mission Possible Partnership, noted that strong government commitments in India have translated into large-scale investments, which, in turn, is beginning to change the economics of how the energy systems in the country work. “There are technologies coming through, with solar being an obvious example. These are not only unlocking immense potential for the transformation of the energy system in India, but the economy as a whole, and that is feeding through into green hydrogen, green steel, green cement and into a whole lot of industries and technologies. India has a chance to be world class,” said Mr Oppenheim.

During the fireside chat that brought together leaders from global businesses and coalitions to explore innovative technologies and business models for accomplishing India’s net-zero vision and help find solutions through public-private cooperation, Mr Paul Marriott, President, SAP Asia Pacific Japan (APJ), said that regulations are one of the barriers in making the transition to renewables swifter and smoother. “India can be the world platform for green energy but regulation needs to be accelerated,” he added. Mr Markus Solibieda, Managing Director, BASF Venture Capital GmbH, highlighted the company’s investments in India’s local start-up ecosystem with particular focus on digitalization as well as sustainability. “We find companies in India that win global recognition,” said Mr Solibieda.

Noting that the momentum on issues such as decarbonisation and net-zero is heartening, Mr Anthony Hobley, Executive Fellow - Strategic Engagement, Center for Nature and Climate, World Economic Forum (WEF), asserted that unless the momentum is “catalysed, we are not going to get to the low-carbon, net zero world on time and at the speed and scale required.” Underscoring the need for a public-private-philanthropic partnership in moving towards a decarbonised world, Mr Hobley said philanthropy is most effective when it works alongside the government and the private sector. “Of the total philanthropy in the world, less than 2 per cent of that goes to climate mitigation,” he said, adding that biggest growth in philanthropy is in places like India, Middle East and South East Asia.

Agreeing with Mr Hobley, Mr Carl Brinton, Managing Director, The Rockefeller Foundation, too emphasized the significant role philanthropy can play in aiding the world towards net-zero. “We would like to work with philanthropies across the world and then connect it with public and private sector so that we can take on these challenges that is well beyond us individually,” said Mr Brinton. Bringing in the entrepreneurial and technology perspective to the discussion, Dr Pankaj Agarwal, CEO, Panitek Power AG, asserted that renewable energy is an existential issue and digitalization is a key element in making the transition smooth. “Integrating technology, bringing all stakeholders together is important,” said Dr Agarwal.

Noting that India and the world are undergoing major transitions, Mr Prem Barthasarathy, Managing Partner, Pontaq, said, “There needs to be a careful balance between the current demand that is on India, by India and by the world, five years and 10 years on the line due to macro-economic changes.”

Tags
Climate change
Carbon emissions
Climate finance
Themes
Climate
Energy
This block is broken or missing. You may be missing content or you might need to enable the original module.