COP27 outcome unclear on the scale and sources of the Loss and Damage fund: TERI experts 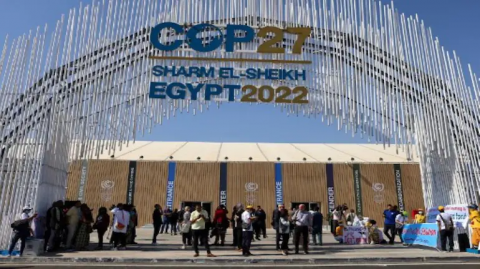 New Delhi, November 20, 2022: After negotiations stretched well beyond the scheduled closure by over a day, the 27th session of the Conference of Parties (COP27) ended on Sunday morning, coming out with the Sharm el-Sheikh Implementation Plan and its announcement on loss and damage funding.

Experts from The Energy and Resources Institute (TERI) delegation to COP27, decoding the key takeaways from the climate negotiations, emphasize that though the funding for loss and damage will be considered a significant outcome of this COP, the scope and source of that fund have remained unaddressed at the session.

Mr RR Rashmi, Distinguished Fellow, TERI, observed that COP27 will be remembered for setting up funding arrangement to address loss and damage. “However, COP27 did not discuss the scale and sources of funds for this purpose nor did it outline the shape and nature of the arrangement,” he pointed out.

The funding arrangements for loss and damage, Mr Rashmi pointed out, could also open up a new debate: Who is particularly vulnerable to climate change? “The scope of fund is limited to such vulnerable countries. Will it exclude India?” he asked.

He also observed that the text of the Sharm el-Sheikh Implementation Plan instead opens up the possibility of pressure being put to enlarge the donor base for the loss and damage funding arrangement as well as replenishment of Global Environment Facility (GEF) and Green Climate Fund (GCF) which are in contravention of the agreed principles.

“The decision makes it clear that it will include sources and funds outside the Convention and the Paris Agreement. This indicates that the possibility of governments contributing to the fund is small and the reliance on flows from Multilateral Development Banks and insurance companies on market terms will be greater. This is also the reason why para 11 of the decision invites the United Nations Security General to convene a meeting of the International Financial Institutions to explore ways of funding loss and damage,” Mr Rashmi said.

On the outcomes on critical issues such New Collective Quantified Goal on climate finance, the Global Goal on Adaptation, and enhanced and early reduction of emissions by developed countries, Mr Rashmi noted, “The decisions have merely kept the processes alive till the next COP in UAE. Even the approaches to be taken are not indicated. Surprisingly, the mitigation related decisions shift the emissions reduction baseline further from 2010 to 2019.”

Despite the COP having been held in Africa which wanted special treatment for its adaptation needs, Mr Rashmi said, it could not decide even the scale of doubling the adaptation finance as agreed at Glasgow.

“COP27 has launched a two-year work programme for just transition. However, it appears to be aimed at balancing the work programme on mitigation that will be concluded next year. It may also water down the climate finance obligations of developed countries and focus more on aligning the private sector flows with energy transition needs of developing countries on market terms,” he added.

Agreeing with Mr Rashmi on the uncertainties on the implementation of the loss and damage funding, Ms Suruchi Bhadwal, Director, Earth Science and Climate Change Division, TERI, said, “The fund for loss and damage is being considered a breakthrough by many developing countries. However, modalities of its implementation are yet to be worked out. Also, past experiences on funding commitments will need to be worked upon with accountabilities from the developed world.” On the discussions on Article 6 of the Paris Agreement on carbon markets, Ms Bhadwal noted, “There have been developments with regard to Article 6, but the means of implementation have to be worked out in the coming years.”

Calling the fund on loss and damage indeed a breakthrough, Dr Shailly Kedia, Senior Fellow, TERI observed that “a mandate has been set for a Transitional Committee to make recommendation for consideration by the COP in 2023.” She, however, pointed out that “though is a welcome outcome although like the global goal on adaptation, it still missed the bus for the first global stocktake in 2023. So the first global stocktake will largely be around mitigation and the temperature goals of the Paris Agreement.”

The new funding mechanism, Dr Kedia said, would assist developing countries particularly vulnerable to the adverse effects of climate change in responding to economic and non-economic loss and damage caused by extreme weather and slow onset events, especially in the context of ongoing and ex post (including rehabilitation, recovery and reconstruction) action.

“The catch here is that the paradigm is still ‘country’ focused and not ‘people’ centred. It remains to be seen if the Transitional Committee will recognize vulnerable people and not just vulnerable countries,” she added.

Noting that the only concrete step towards implementation was the loss and damage fund, Dr Manish Shrivastava, Senior Fellow, TERI, “Otherwise, the Egypt COP allowed preservation of the old tactics of developed countries to delay availability of means of implementation. It relies on weak political signals and hopes that all actors would respond to them. What is most disappointing is that gender finds reference in the text related to non-state actors as if governments have no responsibility for gender equality within climate policy.”

Tags
Climate change
Climate agreements
Climate finance
Themes
Climate
Environment
Energy
This block is broken or missing. You may be missing content or you might need to enable the original module.