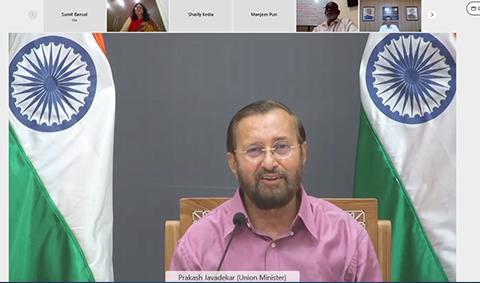 June 4, 2021, New Delhi: Giving an overview of key challenges and solutions in water resource management in India, Mr. Prakash Javadekar, Hon'ble Minister for Environment, Forests and Climate Change highlighted the need to augment rivers which are a perennial source of water. He was speaking on the eve of the World Environment Day, during a virtual curtain raiser event of TERI's annual conference The World Sustainable Development Summit, scheduled to be held in February 2022. The event deliberated on the theme of ‘Sustainable, Equitable and Resilient Water Use'. TERI also released a study on sustainable groundwater management in Lucknow city and announced the launch of a major public campaign on water, in partnership with Editorji, the digital media platform led by Mr. Vikram Chandra.

Adding that most major rivers originate in forests, Mr Javadekar said that the government has spent nearly Rs. 40,000 crore through CAMPA mechanism towards conservation of forests. He urged the states to use the money given by the Finance Commission for improving tree cover and water resources for the intended purpose. Lauding the Ken-Betwa project, the Minister said that interlinking of rivers is also an important concept that helps to transfer water from overflowing rivers to deficit ones. Speaking about the domestic sector, Mr. Javadekar said, "50-60 % water in domestic use can be saved. Aerators need to be used. Every housing society needs to have provision for rooftop rainwater harvesting. Water wasted through reverse osmosis (RO) should be used for gardening purpose. The government is setting new criteria for buildings to have dual piping system, separating drinking water from reused water which can be used solely for flushing purposes."

Underlining the serious implications of India's depleting water resources on its agriculture sector, Dr Vibha Dhawan, DG, TERI, said, "India must review its current trend of producing water intensive crops. We need to develop crop varieties which are resilient to heat and water stress. This, along with wide adoption of technologies that enhance water use efficiency in agriculture is a need of the hour"

Speaking about his experience at the grassroots, Mr. Ayyappa Masagi said, "Attitude is the main problem in water management, be it of people or government. Water has to be conserved at four levels- surface, subsoil, deep soil and groundwater". He emphasized on both rainwater harvesting and reuse of greywater which is particularly neglected in the water conservation discourse.

Ms. Amla Ruia spoke about her experience of seeing improved incomes in rural households in Rajasthan, where she has mobilized rural communities for conserving rainwater through a large number of check dams.

Dr. Yasmin Ali Haque lauded the government's efforts towards bringing gender equity in water management. "Five women in every village being trained to test quality of water as part of the paani samitis, under the Jal Jeevan Mission is a great initiative", she said.

Underlining the need to prioritize local solutions based on local wisdom, particularly for rural women, Ms Nafisa Barot said, "Their cry is for encouraging and restoring traditional rainwater harvesting resources and structures that can give them control, equity, justice -- and the dignity of being responsible for local resources and for local lives which depend on them". She added that instead the government's focus remains on capital-intensive schemes, which are dependent on massive infrastructure, completely outside the control of village committees.

"We should move away from an anthropogenic view of water and realize it supports vast amount of biodiversity in our country. We also need think of many freshwater species that need to be protected", said Bahar Dutt.

Giving an urban perspective, Mr. Shresth Tayal, the Principal Investigator of the Lucknow groundwater study, said rainwater harvesting may not be the main solution in dense cities, hence a more scientific groundwater audit should be conducted for them.

The Lucknow groundwater study reveals that during pre-monsoon the city is overdrawing groundwater nearly seventeen times more than the combined recharge from rainfall and Gomti River into the groundwater system. At this rate, by 2031, the groundwater table in the key localities of central Lucknow is projected to further decline by about 20-25 meters from the current levels. This study was conducted by TERI in collaboration with the Department of Geology, University of Delhi. The study was sponsored by Uttar Pradesh Groundwater Department, Lucknow with support from The World Bank.

Key highlights of the study are as follows:

"The total contribution of groundwater to the economy of Lucknow can be estimated to be about Rs. 8400/- crore, which is almost 1/3rd of city's GDP. If we include indirect contribution from the food service industry, tourism and other services to the city's GDP, it has the potential to influence the entire economy of the city", said Shresth Tayal.

Tags
Drinking water
Ground water
Water demand
Water management
Themes
Water
This block is broken or missing. You may be missing content or you might need to enable the original module.