To understand the costs of integrating variable renewable energy in India's electricity grid, TERI has conducted a model-based assessment 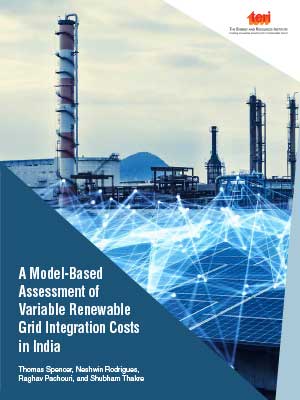 While recent wind and solar auctions have delivered some of the lowest electricity prices in the Indian power system, the inherently variable nature of solar and wind resources pose challenges in supplying reliable electricity. The difficulty in the real-time balancing of supply and demand only increases with an increasing share of wind and solar in the generation mix, requiring attention to not just the operational and technical challenges, but also to the costs of power system adaptation. The need for an analysis of the costs of integration in the Indian context has gained further urgency in the post-COVID scenario, which has seen deterioration in the already precarious finances of power distribution companies.

This report uses an hourly power system model that co-optimises both, power system asset dispatch and investment in new assets, in order to explore the drivers of grid integration costs of variable renewable energy (VRE), and the impact of different assumptions on their magnitude, inflection points, and boundary conditions. Four scenario 'families' were developed, which vary assumptions of a number of factors, including demand, renewable energy deployment, cost of capital, retirement of end-of-life assets, storage costs, availability of market purchases, and capacity addition options in conventional generators. The scenarios are designed to assess the grid integration costs that are likely to be the most substantial in the Indian context.

Key conclusions which emerge from the analysis are: