Bulk procurement in room air conditioning: A critical analysis of the EESL programme

Bulk-procurement programmes can help the next generation energy efficient technologies penetrate the market by aggregating demand for the technology and establishing a demand market for participating manufacturers, thereby leading to rapid reduction in prices. 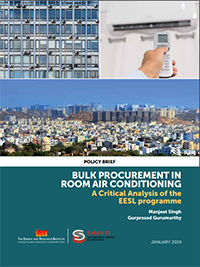 A large number of AC installations in cities have led to significant levels of carbon emissions. They have also created localized heat islands, which adversely impact human well-being. This highlights the need for energy efficient devices and climate friendly solutions to be incorporated at the consumer level, which would further help in reducing emissions as well as in promoting largescale energy savings.

Bulk-procurement programmes can help the next generation technologies penetrate the market. They do this by aggregating the demand for the technology and establishing a demand market for participating manufacturers, thereby leading to rapid reduction in prices. Demand-aggregation concepts, although novel in the Indian context, have been previously applied in the US to promote their rooftop solar PV market.

In the first of its kind, the National Mission for Enhanced Energy Efficiency (NMEEE), in association with BEE–Unnat Jyoti by Affordable LEDs for All (UJALA) scheme, EESL tendered to procure a substantial volume of 7,00,000 LED bulbs. This was done with the dual aim of increasing the market size of this product and lowering the cost of energy-efficient LED lighting. The initial cost of an LED light was INR 310 per piece in 2014, while by September 2016, prices dropped to INR 38. The UJALA scheme has distributed more than 100 million LED bulbs across 120 cities and 14 major states of India, demonstrating the positive impact of bulk procurement.

In keeping with the success of the aforementioned efforts, and to achieve a low-emission and high energyefficient pathway for India, EESL created the ESEAP, which aimed to collaborate with leaders in the AC industry and introduce super-efficient ACs into the market. Technical specifications for super-efficient ACs have been decided based on the best technology available in the market. EESL floated a tender in early 2017 for the procurement of 100,000 super-efficient 1.5 TR ISEER 5.2 (minimum) inverter room ACs, primarily for residential and institutional use The tender requirements mandated that the manufacturers design, manufacture, supply, install, and provide after-sales O&M with extended customer support. While the government preferred to utilize environmentally friendly refrigerants in order to enable more manufacturers to participate in the tender, there was no restriction on refrigerant use as long as they complied with the Ministry of Environment, Forest and Climate Change’s (MoEF&CC) regulatory requirements. For the first tender of the ESEAP, three companies have participated namely Panasonic, Godrej and Daikin. Panasonic submitted the lowest price bid, offering a price of INR 35,000 per unit, while Daikin bid INR 41,000 for superior 5.4 ISEER R-32 ACs. Godrej offered INR 51,000 for HC-290 ACs with ISEER of 5.2. Following this bidding, Daikin and Godrej were given an opportunity to match the lowest price bid, without changing the technical specifications. EESL announced in mid-2017 that 60,000 units would be contracted to Panasonic, and the remaining 40,000 to Godrej, as Daikin finally decided not to match the lowest price bid. Considering that this was the first attempt at bulk procurement for super-efficient ACs, it was encouraging to see that 40% of the bids went towards a low-GWP refrigerant.

The application of the bulk-procurement model to ACs has several advantages from a consumer’s perspective—decrease in the cost of ownership by more than 30% for high-quality products offered by top brands and the availability of EMI options with zero down payments. However, the viability of the model, particularly for large consumer devices like ACs, is debatable, considering the cost of the equipment and the complex nature of the device in question, which contains several components and requires multiple steps for installation, customization, and alignment with consumer perspectives. It is here that drawing parallels between ACs and rooftop solar PV systems could shed some light on the challenges and similarities. A crucial point: both devices aid in energy savings.