70% of total tonne-km of India's freight transport takes place via roads (TERI, 2015) and is dominated by medium and heavy-duty vehicles (MHDVs) with a share of around 60% and the remaining by light-duty vehicles (LDVs). Reduced emission levels from 'hard to abate' sectors such as medium/heavy-duty long-distance transport, aviation, and shipping will continue to be critical in the future. Sustained efforts in this direction are crucial to achieving emission intensity reduction targets globally and in India, as outlined in the country's Nationally Determined Contributions (NDCs) 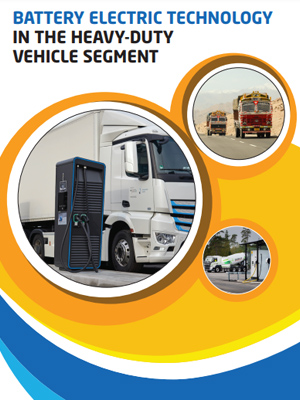 The Indian transport sector has a critical role to play in achieving the Nationally Determined Contribution target of reducing the emissions intensity of Gross Domestic Product (GDP) of India by 33–35% from 2005 levels by 2030 set under the Nationally Determined Contributions (NDC). In the transport sector, TERI estimates that there is a huge potential for energy savings - 40% by 2030 - mainly as a result of electrification and public transport switching.

A number of factors may have contributed to the rise in India's road transport share, especially in the last two decades. These include rapid economic growth, considerable improvements in highway infrastructure, door-to-door service and, the ability of transporters to customize solutions.

The focus of this study is to look into the current status as well as the potential for electrification of MHDVs in India. It also looks into the progress China has made in this particular sector. The following section discusses hard-to-abate sectors which include, long-distance road transport involving MHDVs in detail, including factors that could be considered as impediments to decarbonize the transport sector.