The expanse of Kolahoi Glacier around the 5,425-m-tall peak in Kashmir

Piercing the blue sky with an elevation of 5,425 metres, Mount Kolahoi harbours one of the indispensable glaciated zones of Western Himalaya.

Kolahoi Glacier sits, about 35 kilometres upstream from Pahalgam, at the head of the West Lidder Valley in Kashmir. The glaciated section of this valley
is about 5 km in length. Known among the locals as ‘Goddess of Light’, the glacier boosts the rural economy and tourism as the Lidder River feeds the mighty stream of river Jhelum.

The water in the Jhelum flows from the melting of snow received during the winter as well as the melting of glaciers in the alpine region. Owing to Kolahoi’s meltwater, the Kashmir Valley is significantly fertile with the cultivation of cereal crops, dry fruits, saffron, and apples.


Several settlements in Kashmir depend on meltwater

The Western Himalayan glaciers, including Kolahoi, are naturally vulnerable owing to their location in the tropics and other factors such as south facing slopes and high vertical gradient. This vulnerability seems to be deepening further as the average temperature in the Jhelum basin is on the rise, deforestation in the Upper Lidder Valley is becoming rampant, and human activity has increased near the glacier.

Kolahoi’s shrinkage is now more evident with the scarcity of snowfall every season. Another tipping point is the timing of snowfall which is slowly shifting to late winter months. Fallen snow from the late winter does not settle quickly and melts away as every day gets warmer.

The Energy and Resources Institute (TERI) initiated the Glacier Research Programme in 2008 to analyse climatic and hydrological changes in the Himalayas. Kolahoi was selected as one of the two glaciers, other being East Rathong Glacier in Sikkim, that make an ideal case for long-term measurements. The programme at the glacier in Jhelum basin is being conducted by TERI under scientific collaboration with University of Kashmir.

In the autumn of 2009, a team of scientists from TERI installed an Automatic Weather Station (AWS) at an elevation of 3,925 m in the Kolahoi Glacier Monitoring Observatory. The instrument is equipped with all the essential sensors to measure Kolahoi’s mass balance, which simply put, is growing less in winter and shrinking more in summer.

The primary goal of the project is to get an understanding of the degree of livelihood dependence of downstream communities and melt contribution of the glacier to the river. The team records water level at the Lidderwat Discharge Station, located in the West Lidder River, and frequently makes snow density measurements at the accumulation zone of the glacier.

Current status: Downhill all the way

Kolahoi has begun to melt inconsistently and the silver-crested stream of Lidder is losing its equilibrium.

Wide crevasses in the glacier indicate its decaying health

The measurements of mass balance and the study of satellite data show an incremental pace of melting. To make matters worse, the team found out that the glacier is covered with large crevasses, debris from adjacent mountains, and bears brown and grey colours instead of being glistening white.

Dr Shresth Tayal, Fellow, Centre for Himalayan Ecology at TERI states, “Glacier area change for Kolahoi was calculated from 1980 to 2015 using satellite images. It shows a decline in length by 10%, reduction of glacier boundary (aerial surface) by 13.5% and a loss in volume by 18%."

The extent of snout or toe of Kolahoi in 2007 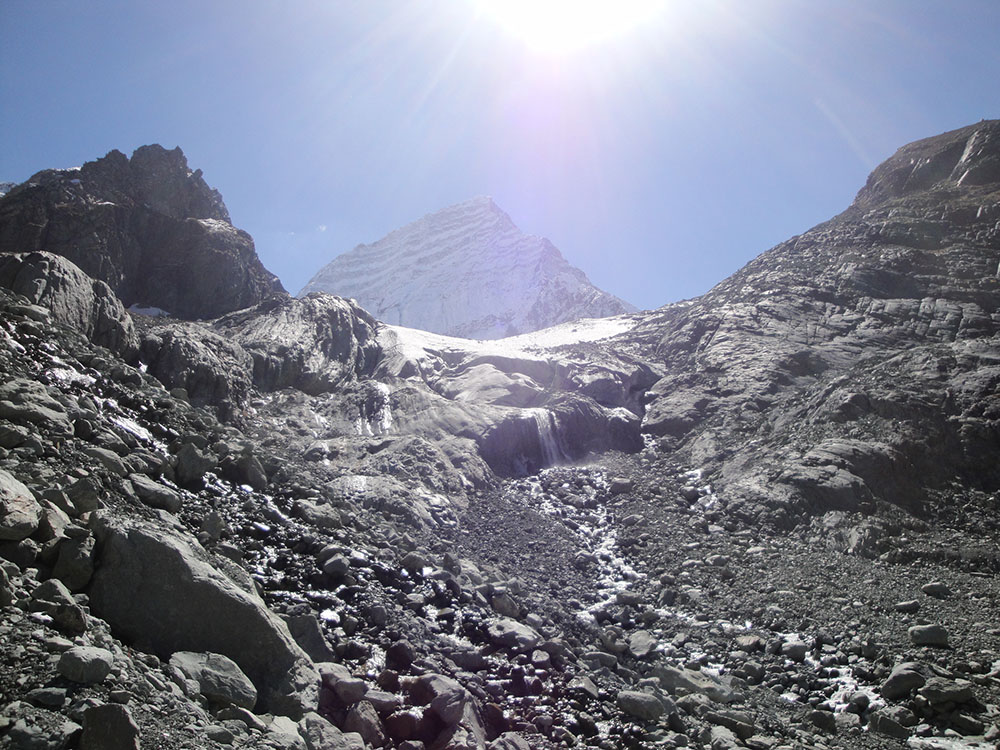 The receded snout of Kolahoi in 2015 where rocks are visible


Corresponding to this loss in length, its area change and volume change also follow a trend of decline. On a cumulative scale, the glacier is losing ice at an alarming rate.

Life along the Lidder is on thin ice

What’s left of downstream communities, apple orchards, and fields of saffron if echoes of Lidder disappear? TERI has learned that almost 50% of the snow cover area in Jhelum disappears at the onset of summer, leaving the farming community water stressed later when their crops need this water. The glacier is the source of about 62% of its water of the Lidder River.


Dr Tayal further adds, “The melting water is permanently altering the fabric of an already fragile ecosystem that is the key selling point of tourism in Kashmir. Without Kashmir’s natural beauty that drives the tourism industry, the local economy is going to dwindle altogether. Any change in length or volume of Kolahoi will directly affect the meltwater which, in due course, hampers the long-term sustainability of livelihoods banking on the river.”

Each year with less than average snowfall is a tragedy in waiting for tourism and agriculture. Both of these sectors generate about 95% of household income dependent on meltwater.

Despite the state population growth of 23.6%, the population of Anantnag District has dropped by 10%. This can be a key result of migration in the Lidder watershed area, which is vulnerable to the impacts of climate change.

The cultivation of apples and rice needs a regular source of water supply for irrigation, most of which tumbles down from Kolahoi.


When the snowfall in Kashmir is not sufficient, soil moisture is too low to sustain saffron crops which have also seen a sharp decline. And if the grass is not greener, the bakarwals are forced to look for pastures somewhere else.


Mohammad Ashraf, a recruit of TERI living in Aru, makes about three trips to the glacier every month. He remarks, “If the glacier melts quickly, our orchards and fields might bear the brunt of the floods. On the other hand, apples lose their natural colour and flavour due to the lack of water at the time of harvest.”


He responsibly maintains the equipment running in this high altitude region to gather accurate data. “The time to take action is now before our Kolahoi turns into puddles” voices Ashraf with an audible sigh.

Glaciers in the rugged terrain of the Western Himalayas have been studied comparatively lesser because of remoteness, the complicated geopolitics, and generally difficult physical access. Dr Tayal points out that there is an urgent need for glacier research and socio-economic assessment in the region.

TERI’s Glacier Research Programme has sustained its efforts for more than a decade, and plans to expand research to find more conclusive evidence on the long term effects of climate change on the ecology and livelihoods of local communities.

To read more about the programme, you may reach Dr Shresth Tayal at stayal@teri.res.in

This photo story was written by Dhawal Trivedi, with inputs from Dr Shresth Tayal.