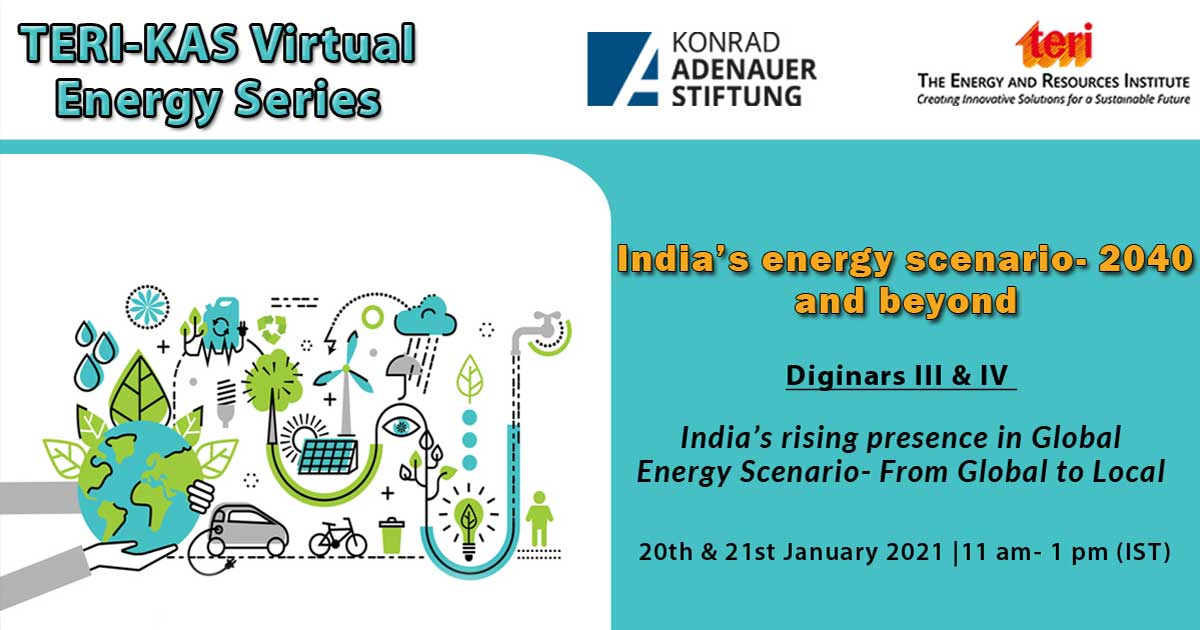 The Energy and Resources Institute (TERI), in partnership with Konrad Adenauer Stiftung (KAS) India office, is organising the second diginar on "India's rising presence in Global Energy Scenario - From Global to Local" as part of its virtual series on "India's energy scenario- 2040 and beyond".

The diginar will focus on how progress in India's energy security scenario is co-dependent on the transformations that occur in the area of climate change and sustainable development goals (SDGs) with global and local implications. It is well known that geopolitical games have been played using conventional fuels as a bargaining chip and to assert power over other nations. Increasingly, similar overtures of geopolitical tussle are evident in the field of clean energy as well. Countries are competing in the technology and innovation space for raw materials and resources, and for cooperating with like-minded countries to move towards a cleaner world. This scenario is beneficial to further climate change goals, but the competition should not lead to further disparities among countries that are already divided into developed, developing and other categories within the climate debate.

Investing in resource base is considered a good mechanism to ensure long term supply of required energy sources. However India also needs to enhance its resource efficiency initiatives to strengthen its recovery and recycling sector to reduce primary resource use. The necessity to access technology, to engage in appropriate international collaboration, and to ensure adoption of clean energy and energy efficiency measures at a sectoral level is far more significant now for India while moving towards its recovery from the pandemic. Innovative measures in the energy sector may create more jobs and secure a green future for India. Countries that secure a low-carbon future may gain in global energy relations in the long term and also transform into formidable geopolitical player. With a decade to go for fulfilling Agenda 2030, India's future energy relations will need to take into cognizance not just resources but also the trickle down effects of energy choices at sub-national and at local level.

Themes
Resource Efficiency & Security
Energy
Tags
Climate change
Energy security
Environmental governance
Renewable energy
Technology interventions
This block is broken or missing. You may be missing content or you might need to enable the original module.