COP-27 Outcomes: From the perspective of Policy, Research & Business 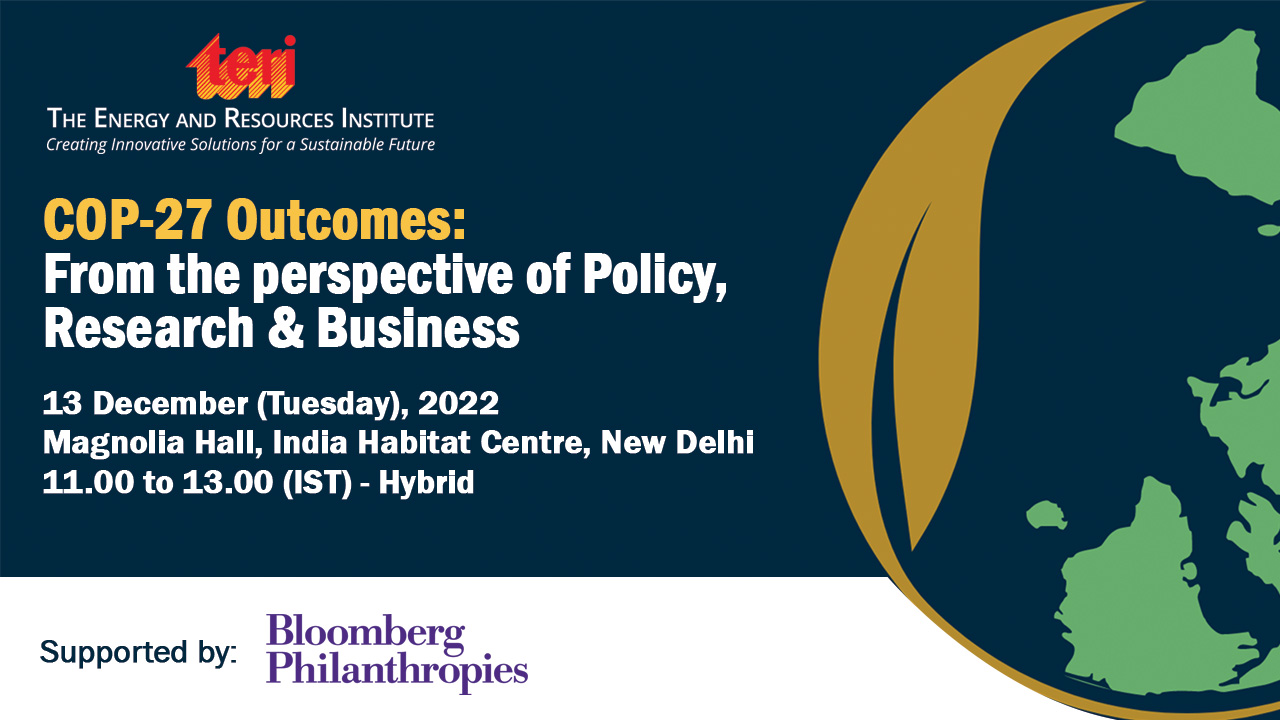 The recently concluded COP27 was widely seen as a COP for developing countries. Prior to COP27, there have been speculations on enhanced action on long-term adaptation primarily because of its geographic location in the continent of Africa. A key ask from COP27 was to double funding for adaptation. Other important agenda items included an enhanced transparency mechanism, the new Collective Quantified Goal on Climate Finance, further clarification towards implementation of Article 6, and progress on the mechanism for Loss and Damage. However, the shadow of the ongoing energy crisis and conflict in Ukraine loomed large on any significant commitment coming out from the developed countries.

COP27 made some progress and deferred many decisions to the next year. Diplomatically, introducing a financial mechanism for Loss and Damage was a big victory for developing countries. The breakthrough decision established a loss and damage fund which will be operationalized by COP28 in 2023. This was important for developing countries who contested at COP27 to compensate countries that are most vulnerable to climate-induced disasters and have contributed little to the climate crisis.

While the negotiated text recognized the need for financial support from multiple sources, pertinent questions such as who pays into the fund, where this money will come from, which countries will be included as beneficiaries, etc. are still to be answered. Modest financial commitments of little over USD 230 million for the Adaptation Fund kept the fund relevant. Institutionally, progress on Article 6 is promising. It keeps the hopes and excitement of the private sector for a thriving global carbon market alive. But the COP failed to make any mentionable progress on enhanced transparency and Global Stocktake to include financial flows from developed countries and the inclusion of an adaptation goal. The agenda of doubling adaptation funding as agreed at COP26 in Glasgow, could not take a step forward. The discussion on critical issues on ‘New Collective Quantified Goal on Climate Finance’ was at a surface level and kept it as a topic of discussion at the COP28 in UAE. Parties at COP27 also agreed on an institutional arrangement to operationalize the Santiago Network for Loss and Damage to catalyze technical assistance to developing countries that are particularly vulnerable to the adverse effects of climate change.

India held its ground firmly during COP. The release of a long-term low carbon emission development strategy (LT-LEDS) at the COP27 outlining India’s proposition towards low carbon development pathways was a decisive moment. The document takes stock of existing policies and focuses on the government roadmap on the following heads: electricity, transportation, adaptation in urban design energy and material efficiency in buildings and sustainable urbanization, decoupling of growth and emissions in industry, carbon dioxide removal and related engineering solutions, increasing forest cover and vegetation, and economic and financial aspects of low carbon transition. This document is based on Article 4.19 of the Paris Agreement where all countries are required to formulate long-term low-carbon emissions strategies. India’s proposal of phasing down all fossil fuels did not get much support from developed countries, exposing their narrow approach towards dealing with climate change and keeping their economic interests supreme. Nevertheless, COP27 raises important policy direction questions, most importantly about the road to COP28 and the role of different actors in implementing India’s long-term LEDS in a climate of non-serious financial commitments from developed countries. To deliberate on these questions, TERI is bringing together representatives from the government, private sector, and civil society. The session will discuss how India sees the outcomes of COP27 and what can and should be expected from different actors in light of India’s long-term LEDS.