Also, an alarming percentage of chronic illnesses are seen. The districts of Kerala present some of the highest levels of risk factors for these diseases for example, blood sugar level (>140 mg/dl, 13.1% among men) and obesity (32.4% among women). Andhra Pradesh, Punjab, and Delhi also present similar large burden of risk factors for chronic morbidity. These heath conditions increase the risk of cardio vascular disease and diabetes in the population.

But then what would bring about a turnaround? Would an increase in spending on large hospitals change the status of public health? What measures are required to improve public health in the country? To find answers to questions like these, the data from National Family Health Survey-4 was analysed in a number of different ways. We undertook an extensive exercise of ranking health, particularly child morbidity and chronic illnesses for all the districts of India to understand what factors would yield the largest incremental improvements in health outcomes and health determinants.

Health status — the bedrock of economy

We got three distinct types of insights on status of public health from our analyses. First, there is considerable difference in health outcomes between states and, there is a considerable difference in health outcomes within the states (see Picture 1) as well. Like for example, Kannore district in Kerala has close to 8% underweight in young children while the corresponding figure in Wayanad district is more than 25%. Consequently, there is an opportunity of bringing equity within the states and between states.

Second, interesting revelation was that the states which are ahead on the indicators of child health (children under five years who are stunted, wasted, underweight, anaemic) are laggards in the domain of chronic illnesses for adults (obesity, diabetes, blood pressure, etc.). To illustrate this, we created an index for each district on two different health domains — child health (See Picture 1) and chronic illnesses (See Picture 2). This can be clearly understood from prevalence data of urban districts of Kerala, where 15 in 100 children are underweight while over 33 in 100 women are overweight; on the other hand, in Jharkhand, 39% children were underweight and 21% women were overweight.

Ill health, both childhood and adult, lead to loss of productive days and increase in the healthcare cost. 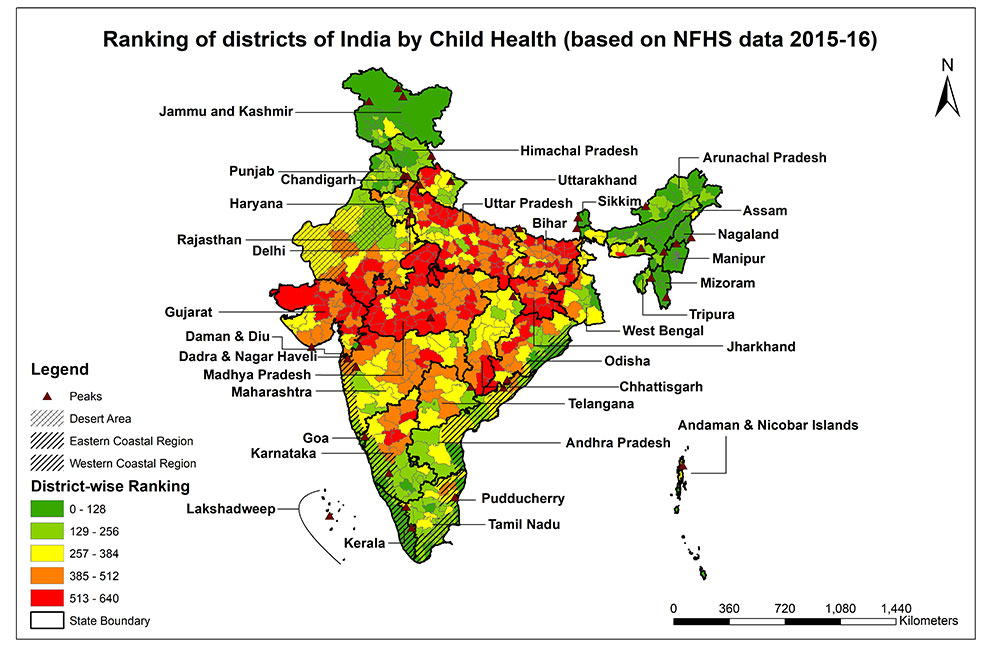 What determines the differences in public health

We explored the associations between these child health outcomes and health determinants, and found that a large share of the child health burden, for instance underweight, is influenced by environmental structures and strictures, primarily literacy among women, nutritious diet of children, and sanitation. That is, districts with lower prevalence of underweight, or stunting in children showed more progressive social practices such as larger number of women with school education, larger number of households having ability to provide nutritious diet and cleaner environment. In other words, the districts with better child health had a higher adoption of preventive and protective mechanisms.

Clearly, improvement in public health status needs to be influenced through a variety of causal pathways (sanitation for associated infectious diseases, lifestyle for linked chronic diseases, nutrition for linked diseases (both overweight and underweight), in other words, different environmental interventions are relevant for addressing different health conditions. Huge investments are needed to provide these basic amenities for better health outcomes, but it does not necessarily mean that there is a need for the most expensive technologies or high speciality machinery. 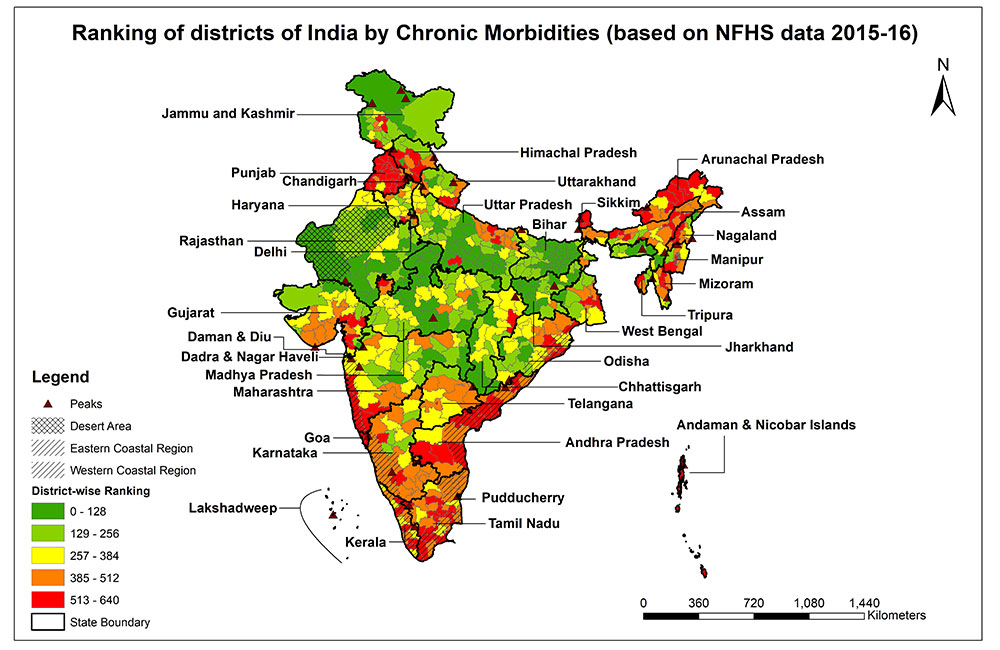 What would help leap ahead

Nearly 125 districts across the country constitute the most challenged group, based on scoring of districts on child morbidity (see Picture 1). These districts collectively have over 30 million rural households at high risk (households with head of family having income less than Rs 5,000 per month). The majority of such households are in Uttar Pradesh, Bihar and Madhya Pradesh and so the most innovative strategies for health interventions should be deployed for these families. An incentive-based access to subsidized services families could make a breakthrough in child health. For instance, sending children to school could be rewarded with better access to affordable food basket.

To kindle transformation in health of children, these worst-affected districts need achievable short term targets coupled with district specific interventions and innovations. Effective alliances with key stakeholders and public private partnerships need to be built to bring health equity within state. Mechanisms which incentivize performance of health protective measures such as higher literacy in women, improved access to affordable nutritious diet, and sanitation facilities need to be promoted.

Creating food systems which result in 'affordable-nutrients-for-every-home' and 'zero-food-waste' could be effective mechanisms. These could be quickly built through initiatives such as 'expanded PDS' which includes improved access to fruits and vegetables. Women led rural-cooperatives of cold storage facilities for perishable produce should mushroom the rural landscape. These should be mandated to sell part of stored produce at subsidized price to local community, thereby, ensuring accessibility and availability of affordable nutrients across all seasons. Mega efforts on improving diet diversity through promotion of behaviour change are needed in both rural and urban India. The new mantra should be 'all-food-groups-on each-plate'.

And for the districts with higher chronic morbidity (largely noted in urban areas) would need context-specific interventions for averting surge in chronic disease. Meaningful interventions would include radical change in behaviour, through promoting physical activity, and promotion of healthier dietary choices. Our estimates show that population at higher risk (in adult age group) for non-communicable disease risk are over 136 million and the largest number (around 50%) reside in Maharashtra, Andhra Pradesh, Uttar Pradesh, Tamil Nadu.

Investments in urban infrastructure which create or increase access to existing activity areas such as school playgrounds through incentivizing school systems could help. The cities and towns could prioritize physical activity and mandate safe walking areas and cycling zones around schools and market places. Taxing tobacco, alcohol, and sugary drinks could help raise revenue and fund improvement in healthy urban infrastructure. Long term benefits can be accrued through, healthy built environment initiatives such as 'Walkable-Township/communities', and plan neighbourhood level activities such as 'Healthy bites'.

Let us accept it, the nutritive-ness in our bowl and the smart-ness of our cities is politically determined! Apart from this, setting up area specific public health status data and information flow systems could build accountability across sectors (water, sanitation, food, education) which have tenable implications on health outcomes. Such information flows, would help in designing and developing strategic area specific alliances and collective action plans. Such planning would foster ownership and accountability. Developing such digitized connectivity would help tailor negotiations to meet local needs (literacy in women, affordable nutritious diet, sanitation facilities, healthy built environment) across sectors. Likewise, information from national health surveys should shape area based policies and allocation of resources.

Ownership of health by non-health sectors is critical for transforming health outcomes for both childhood morbidity and chronic illnesses. Program and policies would impact generations. However, some interventions may be beyond the ambit of healthcare structure.

Themes
Health & Nutrition
Tags
Health
Health policy
Public Health
This block is broken or missing. You may be missing content or you might need to enable the original module.