The PAT (Perform, Achieve and Trade) programme was designed in response to the Indian government’s commitment in the National Action Plan on Climate Change (NAPCC) 2008. As part of its National Mission on Enhanced Energy Efficiency, it was required to put into place a "market based mechanism to enhance cost effectiveness of improvements in energy efficiency in energy-intensive large industries and facilities, through certification of energy savings that could be traded."

Designing energy conservation norms for India was a challenge. After plants were audited, it was found that in every sector there were some of the world’s most energy efficient units and some that used two to six times that amount of energy to produce a tonne of product. The public policy problem, thus, was of a large bandwidth.

After consultations with stakeholders, the PAT programme was launched. The Bureau of Energy Efficiency (BEE) under the Indian government’s Ministry of Power describes the programme as “a regulatory instrument to reduce specific energy consumption in energy intensive industries, with an associated market based mechanism to enhance the cost effectiveness through certification of excess energy saving which can be traded.”

The first PAT cycle was started in 31st March, 2012. Its rules and targets were notified the same month and amended in 2016. One cycle lasts three years, during which every plant – including the world’s best – is required to improve its specific energy consumption (SEC), which is defined as ‘energy entering the factory gate over a year/material leaving the factory gate over the year.’

Plants with lower SECs were given lower targets and vice versa. However, the idea is to encourage industries to surpass their targets. Those exceeding their targets, thus, received Energy Savings Certificates (ESCerts) for excess savings that can be traded for compliance with plants that didn’t meet their targets, or banked for the next cycle.

To implement the PAT programme, certified auditors were accredited by the BEE and audit agencies were empanelled. Familiarisation workshops were also held in all states of India, at least once a year. Organisations such as the Confederation of Indian Industry - Sohrabji Godrej Green Business Centre (CII-GBC), the Center for Study of Science, Technology and Policy (CSTEP) and The Energy and Resources Institute (TERI) assessed and documented technology options to bring about energy efficiency in the large industries targeted such as Aluminium, Iron and Steel, Chlor Alkali etc. In addition, technical committees were set up in each sector to address implementation issues.

The impact of the first PAT cycle included 8.67 million toe (mtoe) of energy saved as against the target of 6.6 mtoe, emission reduction of 31 million tonnes of carbon dioxide and Rs.9,524 crore ($1.5 billion) in saved energy consumption and avoided generation. This is apart from the capacity building, skill development and investment of Rs.24,517 crore ($4 billion) in energy efficient technologies for domestic manufacturing.

However, it was also found that operational parameters were changing and would be different for baseline implementation in further cycles.

In the second PAT cycle (2016-2019), three more industries were added to those in the first cycle and a total energy savings target of 8.869 mtoe was set.

India is now in its third PAT cycle (2017-2020) under which 308 DCs from already notified sectors have been identified for baseline verification for inclusion. Of these, the verification of 273 DCs has been completed and 116 new ones have been included with a target of 1.01 mtoe for them. 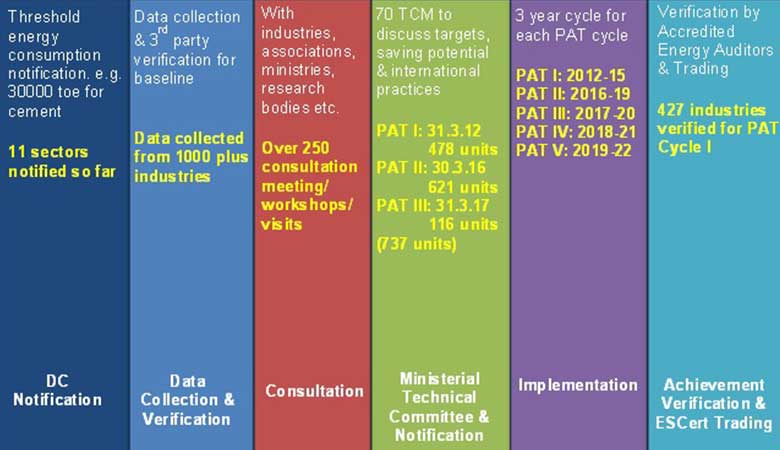 There are many lessons to be learnt from the success of the first PAT cycle.

One is the consultation aspect. There was an extensive consultation process in the design and implementation phase, which aided acceptability. The draft document was widely circulated, and discussed in 96 sectoral and regional/state meetings. In addition, frequent letters were sent to DCs, and state and sectoral meetings. Technical committees considered inputs from DCs before developing normalisation rules. Inputs were assessed, and key changes made in the design and in enhancing ownership of mechanism. These changes included differentiated savings and normalising savings to account for differences in baseline year and target year.

Another lesson is in providing the legal backing, which is important for an exercise of the scope of PAT. For this, an amended EC Act was passed by the Indian parliament in 2010. While the earlier version already included specification of DCs, energy consumption norms, and third-party assessment by accredited auditors, the amendment provided the legal mandate for issuance of certificates for excess savings and their trading.

There is also a lesson in the success itself. Overachievement of the target in first PAT cycle led to reflection on whether the targets were not stringent enough. A methodology for tightened targets is thus called for. When the results of the second and third PAT cycles come in, they will be able to serve as inputs for future design and implementation of this unique scheme.

This piece was originally carried in DSM Spotlight - the newsletter of the International Energy Agency (IEA) Demand-Side Management (DSM) Programme.

Themes
Energy Efficiency
Tags
Energy efficiency
Industry
India
PAT
Bureau of energy efficiency
DSM
Demand side management
Energy conservation
This block is broken or missing. You may be missing content or you might need to enable the original module.