Blockchain and distributed clean energy: How do the twain meet?

When developing the digital currency bitcoin a decade ago, little would have ‘Satoshi Nakamoto’ - the mysterious netizen credited with developing digital currency - realised that it could revolutionise the way electricity could be traded and monetary settlements managed in real time. Nakamoto also developed the world’s first functional blockchain platform, which turned out to be a ground-breaking innovation in managing digital flow of information in a secure and trusted manner.

A blockchain is essentially a distributed ledger that is hosted on the internet and is a digital means of handling secure and trustworthy transactions between various parties involved. A transaction is an exchange of value that is then encoded as a digital exchange of information on a blockchain. The transactions can range from monetary transactions such as the trading of bitcoins, to others like trading electricity.

It is now being thought that the decentralised nature of a blockchain can actually help manage a lot of transactions in applications where real-time/near real-time exchange of value is involved. The blockchain is a piece of computer programme executed on a distributed computing platform and handling a multitude of transactions. It is like a non-centralised database that can be accessed by trusted parties who take part in the transactions and have access to each record that is saved on a blockchain’s ledger. However, the entries cannot be modified since each record or a block has multiple copies verified by each trusted party and hence any ambiguity due to a possible cyber-attack or malicious activity is easily detected by tracing back the ‘chain’.

The power sector is one of the promising areas where blockchain technology can be utilised efficiently. The technology can be used to securely manage the transactions in peer to peer (P-2-P) energy trading among distributed generators such as rooftop solar PV plants, electric vehicle (EV) charging stations, and distributed battery storage units.

TERI has been working extensively with distribution companies (discoms) and is aware of the issues associated with the advent of such Distributed Energy Resources (DERs) in this changing paradigm of smart grids. It also recently came out with some concepts on application of blockchain technology in power distribution to smoothly facilitate management of integration of various DERs in the network, that it presented at the Global Blockchain Congress – Consensus 2018 organised by the Department of Information Technology and Electronics, Government of West Bengal.

A presentation on 'Application of Blockchain in Modern Day Power Systems: Trendsetting a New Paradigm' was made by Alekhya Datta, Fellow, and Dr Shashank Vyas, Associate Fellow, TERI. Research Associates Ashish Sharma and Neshwin Rodrigues of TERI were also part of the concept development team. TERI emerged as the second runner-up in the 'Call for Projects' category. TERI's proposal was selected among the top 12 projects displayed at the Congress. The jury, headed by Prof. Roy, evaluated TERI’s pavilion at the event

The concepts were on innovative use cases for EVs, distributed battery storage, grid-connected microgrids, and rooftop solar PV project financing. TERI had presented novel applications of a blockchain for securely and efficiently managing the transactions that will take place in a smart distribution network that would have large penetration of EVs and Battery Energy Storage Systems (BESS) distributed across the network. Following is a look at the concepts presented -

TERI demonstrated that grid-connected microgrids can be used not just for energy access but also for facilitating P-2-P energy trading and supporting the utility network to which it is connected. A blockchain provides a distributed platform for verifying each and every transaction that is expected to take place in such a system and provide complete security and efficiency leveraging its digital ledger framework. A blockchain has a chain of multiple digital nodes that record a transaction made on it and distributes multiple copies of it so that each node knows which transaction has taken place at a certain time. 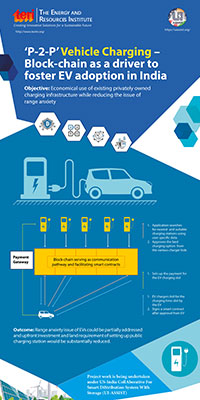 Under this concept, blockchain was presented as a facilitating technology to drive EV adoption in India. Privately owned EV charging stations could be utilised to charge some vehicles passing near the station and the transaction of bids of charging station owners, power/energy flow, billing and real-time settlement of payments could be managed over a blockchain.

In order to overcome the lack of adequate charging infrastructure and for better utilisation of existing infrastructure, a blockchain-based application could enable individuals to share their private EV chargers with other EV customers near their premises, thereby increasing the utilisation of privately owned EV chargers, and recover high upfront investment cost. Based on a P-2-P mode of communication, EV owners near a charging station can search for and use the stations to charge their vehicle’s batteries. Owners of EV charging stations that can be registered on blockchain-based smart-phone apps would be a part of a public directory and could make their charging stations available to the public at times when they are not using them. In return, they can be incentivised to offer charging facilities to other EV owners through set protocols.

The blockchain would handle the billing and invoicing in real time and the EV owner could book a time slot to charge using his/her secure credentials and card and online payment methods.

EVs can also be used as distributed energy storage units that can supply power in response to estimated demand, just like a power plant. Many such EV charging stations could help the local distribution grid by serving as a virtual power plant (VPP) within the area and blockchain could make managing the associated transactions secure and efficient. An EV aggregator could aggregate availability of stored power from a group of EV charging stations so that they can bid for power supply to help ease loading stress on the local DT.

The corresponding exchange of electricity units, monetary value and real-time settlement will lead to large number of transactions. Efficiency and ease of transactions in a secure manner over a blockchain will enable optimal utilisation of electricity stored in EVs in times of grid-balancing at local transformer level. This will also ensure a competitive yet transparent market operation since each actor – EV owner, EV aggregator and the grid operator – will be aware of each and every transaction and will thus find it easy to participate. 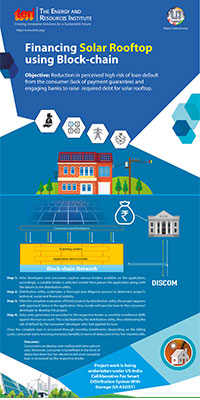 Blockchain can be innovatively used to facilitate adoption of rooftop solar PV by providing ease of transactions. A blockchain can provide a level playing field for banks/financial institutions, project developers, and prospective consumers to strike a deal between financial institutions (those who provide loans for rooftop solar PV projects) and project developers/consumers. This is also expected to provide transparency right from the stage of award of loan, to payment of EMIs to repayment of loans and reduction in consumers’ energy bill, all through smart contracts over a blockchain.