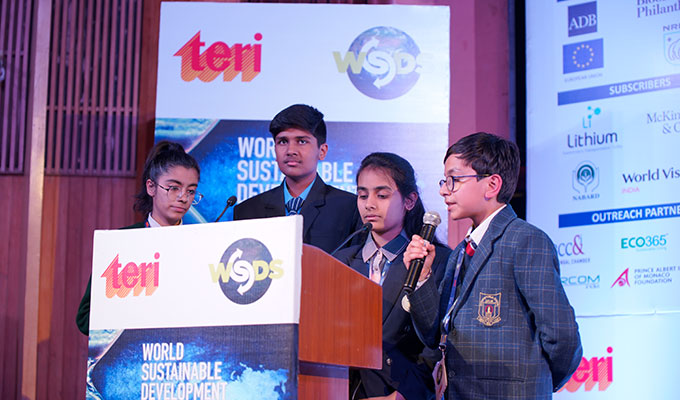 The Youth Climate Conclave (YCC) Second Edition was concluded on 1st October 2021. Since 2019, YCC is being held under the SPIPA (Strategic Partnership for the Implementation of the Paris Agreement) project with Ministry of Environment, Forest & Climate Change, Government of India is the nodal ministry. The SPIPA project is being implemented by the Delegation of the European Union to India, in close cooperation with GIZ-India. YCC is being implemented by TERI in partnership with GIZ-India and CEEW. The conclave is envisaged as a competitive and an educative mode of action, wherein youth from across the country comes together to join hands and address the issues of climate change.

During the second edition, in 2021, the inaugural session was held in the presence of HE Mr Bhupendra Yadav, Union Minister, Ministry of Environment, Forest & Climate Change, Government of India (via video message); HE Mr Vincenzo de Luca, Ambassador of Italy to India; HE Mr Alexander Ellis, British High Commissioner to India; HE Mr Ugo Astuto, Ambassador of the European Union to India and Dr Vibha Dhawan, Director General, TERI.

The three-day programme which was scheduled from 29th September to 1st October 2021 included panel discussions on topics, "Do we listen to Science?", "We are the World" and "India acts". The Conclave also included presentations on the Eco-clubs Program of the MoEFCC from six different states. Screening of winning short videos and video messages from business leaders and climate personalities were also part of the conclave. As an outcome of the programme, a Youth Pledge was drafted in a participatory manner by the youth participants. The third day included a debate session among the youth participants and a final presentation of the ‘Youth Pledge’ was also part of the deliberations.

The youth pledge was presented on 7th October 2021 at the Adaptation Futures 2020.

Pledge can be viewed here

To know the winners of YCC Second Edition Click Here

Themes
Environment
Tags
Climate awareness
This block is broken or missing. You may be missing content or you might need to enable the original module.