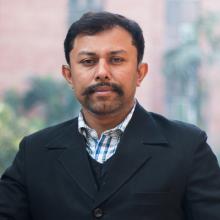 Dr. Sumit Sharma is presently working in TERI as Director (Earth Science and Climate Change Division, TERI); is a pass out from Delhi College of Engineering and Indian Institute of Technology, New Delhi. He is convening a group of 15 researchers in TERI focussing on various environmental issues. In last 14 years, he has worked on more than 20 projects related to air quality management which involved air quality monitoring, emission inventorisation, air quality modelling (dispersion and receptor), and drafting air quality management plans. He has worked on pollution source apportionment studies carried out for different cities/regions in India, in which he was actively involved in preparing emission inventories and carrying out air quality simulations. He has also worked on addressing regional and urban scale particulate and ozone pollution related issues using state of the art chemical transport based air quality models for prediction of air quality in current and future scenarios. As a project investigator he has worked for the Central Pollution Control Board of India, to prepare emission inventories for vehicular sector in 6 Indian cities also drafted action plans for control of these emissions. He was also the part of the main team led by Prof. V Ramanathan (UCSD) to carry out Indo-California Air Pollution Mitigation Program for control of vehicular emissions in India. Recently, under the chairman ship of Prof. V. Ramanathan, he has led a team of 25 researchers across 17 different international institutes to come up with a report 'Breathing Cleaner Air' to provide 10 scalable solutions for air quality improvement in India. These reports provide action plans for control of air pollution and have been submitted to Government of India. He has also been involved in intervention analysis studies and has assessed the air quality impact of recently launched odd-even scheme in Delhi for control of pollution. In past he has also carried out a cost benefit analysis of introduction of advanced vehicular emissions and fuel quality norms and other options to reduce vehicular emissions in India. The project findings were submitted to the Government empowered Auto Fuel Vision 2025Committee in India. He has worked with big teams both as a team member and project leader. His main responsibilities include: writing proposals, forming teams, executing projects of air quality relevance, report preparation, presentation and discussions, and dissemination of results to the relevant stakeholders. His profile also involves regular interactions with various government departments, academic institutions, NGOs, and industries. He has also organized a number of training programmes and workshops on air quality issues to sensitize the stakeholders and also to disseminate research findings. Four annual training programs have been conducted for the Central Pollution Control Board of India on air quality modelling and source apportionment studies. Similar programs have also been conducted for building the capacities at the state level in India. He has taken guest lectures at TERI University, New Delhi on air pollution modelling and also delivered several presentations in the relevant workshops and conferences.