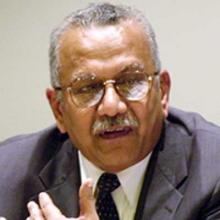 Mr Desai joined TERI as Distinguished Fellow in August 2005 after a long and illustrious career with the Government of India and the United Nations.

A graduate of the London School of Economics, Mr Desai retired from the UN in 2003 as Under-Secretary General for Economic and Social Affairs.

Prior joining the UN, he was Secretary and Chief Economic Adviser in India 's Ministry of Finance. He served as Deputy Secretary-General of the 1992 United Nations Conference on Environment and Development (UNCED), a position to which he was appointed in June 1990.

His international contributions towards development and promotion of sustainable development as the goal of policy gained significant prominence, first as Senior Adviser and principal draftsman for 'Our Common Future', the Report of the Brundtland Commission on Environment and Development and then as Deputy Secretary-General for the Rio Earth Summit, as manager of the Commission on Sustainable Development for its first decade and as the Secretary General for the Johannesburg Summit. He was also known for his organisation of the Copenhagen Summit on Social Development, the Monterrey Summit on Finance for Development and many other global events. He was also instrumental in increasing the involvement of NGOs in the work of the UN.

In his career with Government of India Mr Desai worked at senior levels in the Planning Commission where he helped to establish and manage the system for the cost-benefit analysis of public investment projects. He was also the Secretary of the National Commission on the Development of Backward Areas and a Member-Secretary of the Economic Advisory Council to the Prime Minister. He was the Chief Economic Adviser and Secretary in the Department of Economic Affairs in the Ministry of Finance.

Prior his joining the Government of India, Mr Desai worked as a consultant for Tata Economic Consultancy Services and lectured in economics at the Universities of Southampton and Liverpool in the United Kingdom. He has been a member of the Commonwealth Secretariat Expert Group on Climate Change and has published several articles and papers on development planning, regional economics, industry, energy and international economic relations.

After his retirement Mr Desai continued his association with the UN as a Special Adviser to the UN Secretary General for Internet Governance until December 2010 and chaired the UN's Working Group on Internet Governance . Mr Desai has been associated with many Committees of the Government of India including the National Security Advisory Board, the Prime Minister's Council on Climate Change, and several Committees set up by the Planning Commission, the Ministry of Environment and Forests and the Reserve Bank of India. He is the co-chair of the India-UK Roundtable set up by the two Governments.

He is associated with the governing bodies of many international and international NGOs including the WWF International, the Shakti Sustainable Energy Foundation, the Institute of Economic Growth, the National Institute of Urban Affairs, the Society for the Promotion of Wasteland Development, the Delhi Policy Group, the Nehru Memorial Museum and Library and the Commonwealth Human Rights Initiative.

Mr Desai is an Honorary Professor at the Indian Council for Research in International Economic Relations, a Trustee of the Delhi Policy Group, an Honorary Fellow of the London School of Economics and Political Science, UK. He writes a monthly column for the Indian financial daily, The Business Standard.