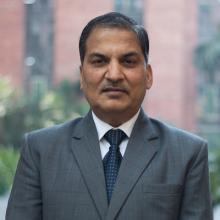 Dr Ashvini Kumar is Senior Fellow and Senior Director, Renewable Energy Technologies, TERI. He took the post after superannuation from the post of the Managing Director of the Solar Energy Corporation of India Ltd. (SECI), which is a Government of India enterprise set up for implementation of the National Solar Mission. Dr Kumar joined SECI as the Director (Solar) in October 2012 and thereafter continued as MD until July 2017. During his time in SECI, he steered it to develop and implement wide ranging programmes in solar and wind energy. He is credited in turning around SECI into a positive net worth company during 2014-15.

Before joining SECI, he worked with the Ministry of New and Renewable Energy (MNRE), Government of India, in various capacities for over 26 years.

Dr Kumar obtained his Doctorate Degree in Solar Energy from IIT Delhi in 1981 and continued to carry out scientific work at IIT Delhi and later at Solar Energy Centre, now rechristened as National Institute of Solar Energy.